Due to the coronavirus situation, the international conference on „Multiple Legalities: Conflict and Entanglement in the Global Legal Order“ will take place in a virtual format on January 13-15, 2021. Please find more information here.

Now open: Call for Papers on Multiple Legalities – Conflict and Entanglement in the Global Legal Order

The projects on interface law (Graduate Institute, Geneva) and on conditions of normative conflict (Humboldt University Berlin) are jointly organizing an international conference on „Multiple Legalities: Conflict and Entanglement in the Global Legal Order“, to take place at the Wissenschaftszentrum Berlin on July 6-8, 2020. The conference aims at bringing together a wide range of perspectives from international law and jurisprudence on the issue of multiplicity in the contemporary global legal order. Confirmed speakers include Bhupinder S. Chimni, Jeffrey Dunoff, Sally E. Merry, and Brian Z. Tamanaha. The Call for Papers is now open (through 15 January 2020).

OSAIC hosted the Section ‘International Institutions and Global (Dis-)order: Fragmentation, Regime Complexity, and Norm Collisions’ at the ECPR General Conference that took place from 22-25 August in Hamburg. The Section focused on the possible coordination problems and conflict potential arising from a global governance system characterized by increasing institutional density. Scholars working at the intersection of international law and international relations (IR) interacted in panels addressing questions that ranged from the reasons for the emergence of institutional overlaps via the responses to norm collisions to the effects that overlaps and conflicts between international institutions have for the global order.

Chaired by Michael Zürn and Benjamin Faude, the Section included a panel organized by Anna Geis on the potentials and challenges of inter-organizational security governance in Africa. Another panel, chaired by Markus Jachtenfuchs, concentrated on old and new authorities in internet governance. A panel led by Christian Kreuder-Sonnen focused on the governance of regime complexity, whereas Sassan Gholiagha’s panel zoomed in on the relations between norms and responses to norm collisions. Lastly, Benjamin Faude headed a panel on the transformation of global environmental governance. Next to contributions from the OSAIC research group, the Section also included panels and papers from other leading scholars in the field that identified with the Section’s thematic call.

An overview of the Section and its panels as well as some of the papers can be found here. 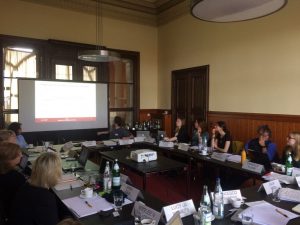 The DFG research group “OSAIC” came together for its first progress workshop at the WZB Berlin Social Science Center on the 9th of October 2017. The main goal of the meeting was to discuss different approaches to and techniques of identifying interface conflicts within and across overlapping spheres of authority. Each of the six project groups presented a first inventory of interface conflicts and their methods employed to establish the cases. While substantively covering a very diverse set of policy fields, the projects converge toward two basic strategies for identifying interface conflicts: one response-driven, discovering conflicts through the ways they are acted upon (i.e. in judicial forums) and one actor-driven, tracing contradictory normative statements of affected parties and stakeholders. OSAIC’s coordination unit (Z-project) will collect all cases of interface conflicts discovered in the single projects and make them available in a database at the final stages of the group’s research process.

For public comments and questions, you may also use our project page on ResearchGate. 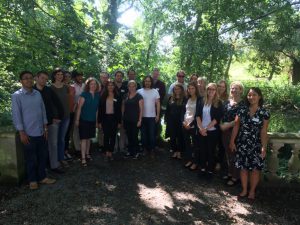 The DFG research group „OSAIC“ was officially launched in June 2017. In July, all members of the research group came together for a kick-off workshop at Schloss Blankensee in Brandenburg. We discussed fundamental conceptual questions, the research objectives of the single projects and further collaboration within the group. Our overarching goals for the following months are to provide an inventory of interface conflicts within and across overlapping spheres of authority and to both reconstruct and explain the normative responses to those conflicts. We will come togehter for our next workshop in October to discuss the first cases of interface conflicts identified by the project groups.
Project updates will also be posted and open to comments/questions on our ResearchGate project page. 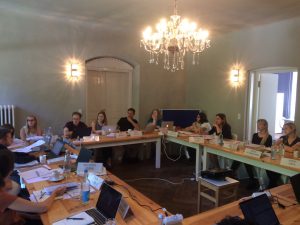